What is it about the Giant Trevally or GT as it is more commonly known?

I’m not entirely sure that I could explain it, ever since I was young kid the GT has been a fish that I have been obsessed with.  I’ve been fortunate enough to battle with huge marlin, tuna, sharks and countless other fish but even after over 30 years later none spark my interest like the thought of another GT trip!

The VW of the ocean as we like to refer to the monster size GT’s, found in places like Exmouth and Shark Bay in Western Australia or Oman, Maldives, Andaman’s or Tanzania just to mention a few of the worlds hotspots for the magic 100lb plus fish. Some of I’ve been lucky enough to fish the others are well etched into the bucket list.

In my travels, I’ve been fortunate enough to spend time popping and stick baiting for GT’s with some of the best charter captains and anglers on the planet. So what did they teach me

Popping for GT’s falls into one of two categories for fisherman they either love it or hate it, it’s hard work, particularly using big gear for even bigger fish, but in my mind, the rewards are more than worth it!

For the infrequent fisherman chasing sub 50 pound GT’s in relatively open water,  a good quality rod, reel and braid will get the job done. An outfit in this category is the Hamachi Nano Ultra Cast 7’6 paired with a Finnor Offshore 6500 and with everything going your way, you can land much larger GT’s with this outfit. If your budget will allow its well worth jumping up a few rungs with the reel to a Hamachi Agera XXH 6500.

But if your mind like many is focused on landing one of the big dark black reef hugging monster size GT’s then you need to gear up for the challenge, these bruisers don’t give up easily. Sure they will come out from the deep crevice’s to check out your popper but they didn’t get 100 pound by devouring everything that swims past.  And when you are lucky enough to see what looks a 44 gallon drum inhaling your popper, that is when everything needs to be up to the task as the GT turns and heads for home, pealing  100lb braid from your reel looking for the nearest sharpest coral bommie to wrap it round.

And if your chasing these guys from the shore at places like Oyster reef at the tip of the Exmouth cape hats off to you!  Hamachi’s new 10 foot XOS GT’n’Doggie PE6-10 hands down is the only way to go, it’s one of the very few blanks on the market built specifically for chasing big fish with lures from the shore. It’s an ultra light ultra strong 3 piece nano blank, I know what you’re thinking a 3 piece rod 100lb braid, Hamachi offers a worldwide lifetime warranty and we have more than given the new 3 piece expedition series rods a work out on big sharks, GT’s and they are brilliant for travelling with the 10′ packs down to a three and half feet and the 8’2 about three feet. Being an ultra light weight high performance blank you can cast with all day and when it comes to fighting fish it will put the pressure on the fish not the angler . At around $850 USD they are far from a low cost option but in the top end of the market you can’t beat them. Having experimented with a lot of other high-end and Japanese rods Smith’s, Carpenter, ripple fisher to name a few all great options from a boat, but the Doggies with the extra length leave them for dead.

If budget is a concern every now and then http://www.FishingAndBoatingDeals.com puts one or two from the range up for auction on eBay http://stores.ebay.com.au/fishingandboatingdealsglobalstore as part of their advertising helps them out with search engine rankings , the beauty is most people at top end of the market can’t be bothered with auctions preferring to buy  then and there, if you’ve got a little time up your sleeve and are happy with a one year warranty (hell if a rods going to fail, it will most likely do it in the first trip, I’ve got a cupboard full of Hamachi’s and yet to have an issue!) then you can pick them up for around half price or so

A.) There are no blanks that compare to Hamachi’s blanks!

B.) Ever asked about the warranty on a custom rod and what it covers? 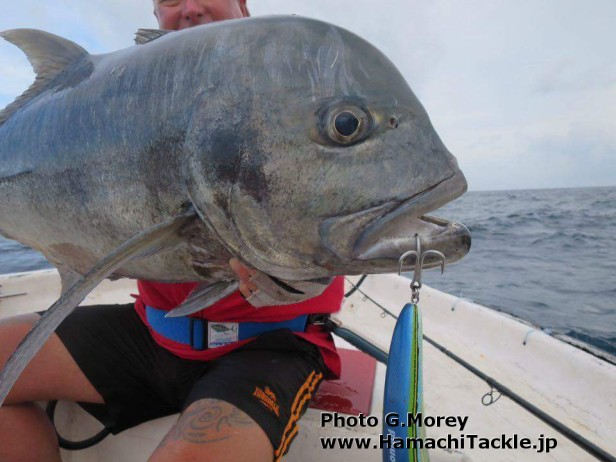 What’s my rod for landing absolute mammoth GT’s from a boat, well that’s a little harder as I do like  the Carpenter Blues Chaser and the Ripple Fisher F stick both around the $900USD mark , but I travel a lot and the Hamachi 8’2 PE8-12 XOS GT’n’Doggie packs down to less than half the length of either the Carpenter or Ripple Fisher, depending on the popper or stick bait it casts a little further but your only talking a few meters, however the fighting power and Hamachi’s nano composite design wins hands down. The Carpenter Blues Chaser and even the Carpenter monster hunter cap at out between 20 and 28lbs max drag and the Ripple Fisher is a little lighter again for max drag.  At 45 degrees I’ve cranked the Hamachi PE8-12 up to the 50lb of drag mark, great for dragging these creatures out into deeper water well away from their razor sharp coral lair. Once in the cleaner water I back the drag off to around the 30lb mark so we can move the boat to around a 60 degree fight angle, if the fish does duck under the boat, which they have an uncanny knack for, then I follow it with the rod tip to keep the load spread across the blank. Point loading / high sticking whatever you wish to call it is the quickest way to make a “LOTS OF PIECES” popping rod and almost certainly lose you the fish, sure the nano content in the XOS GT’n’Doggie will give you a little more margin for error.

For the braid its comes down to casting distance required verses how gnarly the coral lair is, 80lb will give a surprisingly longer cast than 100lb or 130lb, particularly a very good quality thin diameter braid, I pretty much solely use Hamachi Bulletproof braid.  The 130lb is hard to beat if you need to lock the drag down and use the boat to drag it out to deeper water. 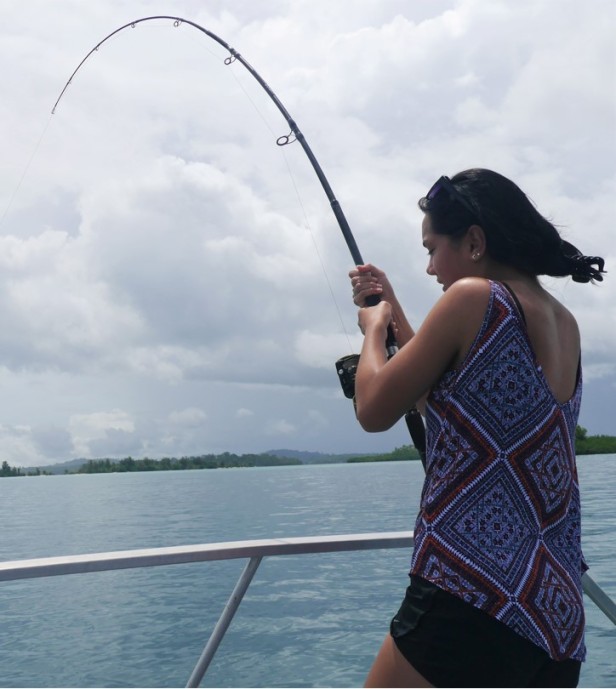 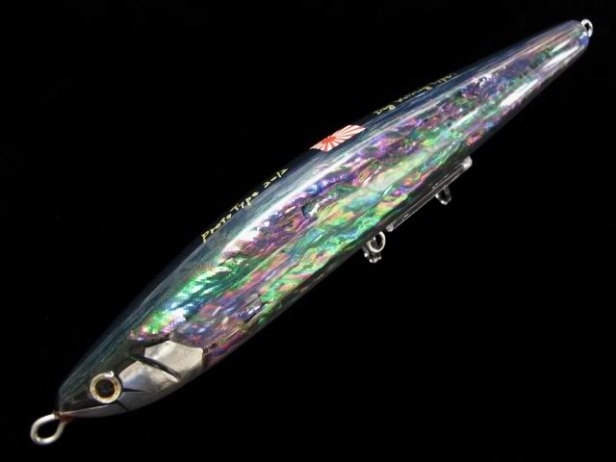 For the popper or stick bait, there’s lots of good ones on the market to fill your tackle box with , baits like Hammerhead’s or Native Works Napalm 250mm popper circa $190USD or Moutoukenmaru Minopenmaru 25F stick bait circa $300USD. They would look awesome sitting on my desk but toss over a jaggered coral reef , I tend to use solid wood poppers or stick baits with a full length 300lb through wire, 300lb split rings 5x strong single inline eye 6/0 jig hooks, Hawaiin Island Designs, Hamachi.

Stay tuned for part 2 covering the tactics of how to find them , lure them out and land a 100 pounder…