Well, January in Whitianga,New Zealand. One of the countrys most popular summer holiday resort towns, this time of year the town swells from 4000 to 30000 people, boating, jet skiing, masses of folks. To this correspondent that has always meant pretty hard fishing, with the swarms of holiday boats (like mine) everywhere, this is pretty much always a hard time to find good inshore fishing.

My first couple of trips out in my lovely new toy, Bespoke, a spanking new 5.5m Allenco Aluminium boat, with an internal layout customised by myself,(hence her name, look it up) were as fruitless as a money tree, no joy at all, although there are still to be found, while the tides are running, large schools of kahawai outside the bay itself, around Ohinau Island, Needle rock and Whale rock especially, which offer great sport fishing fun, but you know, you can really only catch so many kahawai before that starts to pale a little, and looking for something a little closer to base was becoming a priority for me. What to do, what to do?

For once my ceaseless moaning actually paid off, as a mate of mine, Grant, finally told me- just to shut me up I am sure, and fair enough too- that the kingfish were actually in the bay again, chasing the schools of mackerel around the place. Ah-ha! Useful info!

Very good to know, as I had been wondering if they were there yet, but as I had seen no signs of any birdlife or surface activity at all in the bay, in my innocence I had not thought they would be there yet. Indeed, his daughter Kelly had just weighed in a very nice 13.6 kilo kingi she had landed on 4kg line the day before, so the critters were definitely around.

Last year we had enjoyed a lot of fun on these fish , so now it was my chance to try out the new boat on some decent inshore fish action, as per her design. Grant had told me that livebaits were the key, there are plenty of nice mackerel in the bay, though these usually stop biting by mid morning. The key to finding these baits was the ultra and ever reliable spotting of working….not birds, but boats. Follow the Epic Charters boats boys, they know where the baitfish are! Bit of a cheat really, as any sounder can easily find the dense packed schools of fish out in the bay, look between the 8 to 10m line and you should be into them.

The masses of fish are pretty easy to find on the Simrad.

Last summer there had been plenty of schools of small kahawai working in the bay, and I had worked these with a variety of trolling lures, deep diving Rapala’s, Sebiles and Yo Zuri lures mostly, and on these we had loads of fun. The girls loved it! 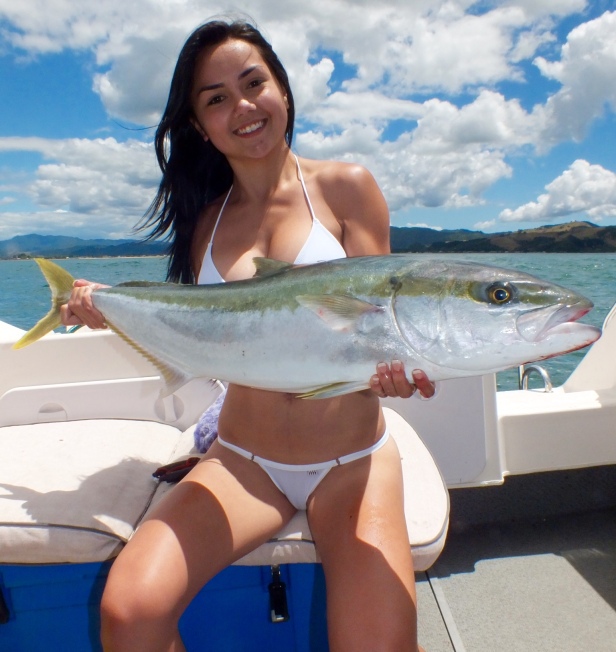 Last year we also got into the kingfish in exactly the same area, but on lures, not live baits. Here Tackleguru Team Member Rebecca holds a prime example of an inner harbour kingfish.

I had made sure when we designed Bespoke that there was a livebait tank built in for exactly this purpose, that is targeting inshore kingfish, so next morning after Grant gave me this excellent Gen, I grabbed my nephew Tom, and once out in the bay at the (for me) eye wateringly early time of 7.30, we soon had the deep red masses of baitfish showing on the Simrad. Over the side with a couple of sabiki rigs, and in short order we had several nice mackerel swimming around looking decidedly startled in the baittank.

A jack mackerel contemplating a rather bleak future…..although actually this lone survivor we put back as we were done for the day and he was left over! One lucky livie…..

Once we had some baits, it was time to get them out doing their job. Just a simple unweighted trace, I like 50lb flurocarbon , with a good sharp recurve or livebait hook, I really like the TROKAR hooks for this, bloody deadly hooks, on a two metre trace is fine. This relatively light trace is fine as there is a clear bottom, and the fish are not likely to be too monstrous. Were we out further, around the islands and reefs of the Mercury Islands say, then I would beef these up to at least 80lb, more like 100lb, as the chance a of really decent fish is much greater.

Personal preference, but I prefer to hook the fish through their sinuses, this damages the fish hardly at all, and the point is well exposed when it comes time to set the hook. Having the hook through the back of the neck I have found can often lead to the hook burying its point into the shoulder of the bait, meaning the kingfish can often simply spit the dummy. I have always found the sinus hook to give a better hook-up rate. Still, each to their own.

Nose jewellery is the latest accoutrement for the fashionable Jack Mackerel. This example soon wowed the crowds below, and was had for lunch by a nice little king. Note the hook placement through the sinuses…this doesn’t hurt or harm the fish at all, unlike hooking through the flesh of the shoulder.

With a couple of livies now doing their thing out the back of the boat, we concentrated on trying to find more baits, managing just a couple, but it was hard work. With livies deployed, we could no longer chase the fast moving mackerel schools, so instead of macks, the sabikis started picking up baby snapper. No, you cant use them for live baits. No. No you cannot! No! This was a discussion had as I ditched the fourth little snapper, despite protests, back over the side.

However, bait catching time was almost at an end, as on my sounder i noticed a large red blob move up to meet the tiny speck of the little snapper I had just popped back…..methinks a predator was lurking…..

Methunk right. In short order the close in livie starting dancing about frantically…. someone was sniffing around one alarmed little mackerel…wait for it,….wait for iitttt….. WHAM! The rod arched over, and we were in! I have caught the odd king before, and besides, I wanted to manouvre the boat, so Tom was told in no uncertain terms to grab the rod.

This close in I like using fairly light spin sets, as you do not need the skull dragging horsepower of larger rod and reel sets over this clear sandy bottom, and it also gives you the choice to switch between baits and surface lures easily and quickly should you so desire.

The sets I prefer to use in these areas are a 5000 sized Penn Battle II set loaded with 20lb braid, mounted on a 7ft Hamachi Micro-jig rod- meathunting i know, but it is always a nice thought to have something with at least a little stopping power when targetting kingfish….you are never totally sure just what size they will get to here, and the other set I had out was a 4000 sized Battle II loaded with 15lb Spiderwire Fluro braid, also on a hamachi, this time the ultraflexible Hamachi Nano-Xylimum PE 0.5-3 rod.

Over a flat sandy bottom in 8 metres or so of water, you could go lighter, as the four kg capture the other day had shown, but me, i like to have the pulling power of slightly heavier line, getting the fish in to the boat greener so any released fish will be less exhausted.

After a short but spirited tussle, we soon had Toms first King of the day boat side. A bit wee to keep, just on 75cm, it was soon liberated, and we were back in to baithunting mode. 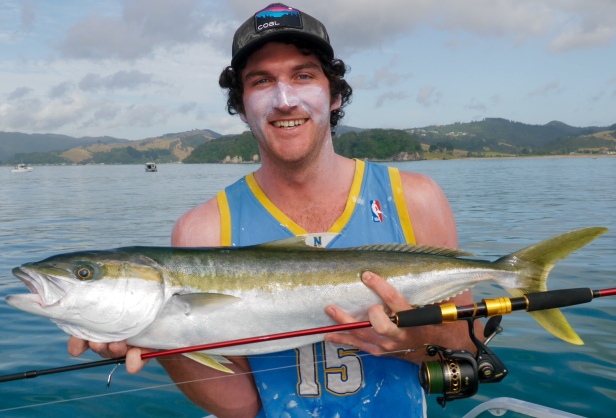 Score one for Tom! The Penn/Hamachi combo is a killer on fish like these.

Over the next couple of hours, we were lucky to pick up another three or four live baits, because as soon as they came aboard, we were putting them back over with a nice new nose ring, as we has several false starts and stuff-ups, dropping a couple of fish and having baits coughed back up too munted to be in any way regarded as “live baits” any more. Perhaps “twitch baits” may be more accurate. “Final last gasp spasm baits”, while entirely accurate, just sounds..awful. Ugh.

Better fish on heavier gear….the Penn Battle II, loaded with 20lb fireline, on the Hamachi Micro Jig rod sorted this fish out for Tom very nicely. All within sight of their beach house in the background!

After landing three three of these inner harbour kings, keeping a nice little 9kg fish for Tom to take back with him to work to impress his mates, we called it a morning. In the three hours we spent on the water we had had a good play with those great scrappers the yellowtail kingfish, enjoyed ourselfs messing about with sabikis catching live jack mackerel for baits anf a bunch of tiny undersized snapper….a real pest, but as it turned out a great attractant for the marauding kingfish, and on the way back in to the jetty, my old mates the kahawai popped up on the surface for us to flick some small micro-jigs at, just to give the light little 6lb spinsets a workout.

These kingfish have really been a life saver for the inshore sportsfishery here, great fish easily accessable to any boats, large or small…hell, even kayaks, and in a period when fish activity (well, I say “fish” but lets face it, to most folks this means “snapper”) in the bay is very quiet. It certainly has been awesome fun in the new boat.

My 5.5m Allenco boat “Bespoke”…. Made for inshore sportsfishing